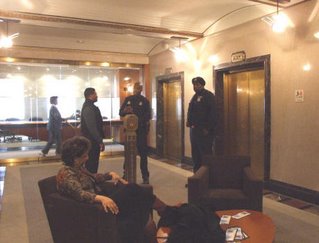 Welcome to the 7th full installment of the "Union Bouquet". Here, submitted for your perusal, are various items of union note throughout the blogosphere.

UTLA sponsored "Grievance Tour 06", a grievance with an accompanying press release. LAUSD decided to raise class sizes by 2 students per teacher, an' the union ain't having it. A busload of UTLA members are went from school to school and then to LAUSD HQ to file the grievance. LAUSD officials claim that the union is simply flexing its muscles in preparation for the coming contract negotiations. UTLA officials counter they're trying to reduce runaway class sizes-- making sure physical education classes don't exceed 55 students per teacher (as they're currently hitting 70 in some cases right now). More here.

Karen's one step away from arbitration with her grievance, and she sounds pretty excited about it.

Teachers silenced and berated. Students not allowed to talk at lunch. No recess across grade levels. Peanut butter and jelly banned at lunch. Is this Iran, North Korea or Iraq? Nope. Welcome to Mokapu Elementary School on the Kaneohe Marine Corps Base, Hawaii. Your dictator, er, principal? Annette Olstrem.

ICE-UFT isn't some variant of methamphetamine sweeping the country. It's actually an independent caucus of teachers within the United Federation of Teachers in New York City. Founded in 2003, the Independent Community of Educations opposes the reigning Unity party currently dominating Randi Weingarten's UFT. Imagine that...a local large enough to have it's own labor-union political parties. Anyhow, despite the rosy presentation of the new proposed UFT/NY contract, ICE urges its members to take a short, unbiased quiz prior to casting a ratification vote.

Schoolgal gives a brief history of the UFT on Take back the UFT, kind of a potluck blog for anti-Unity bloggers.

Miss Building recounts when the UFT district rep visited her school for a q & a session about the proposed contract and how they should vote.

EdNotes has an interesting exchange with NY-UFT Chapter Leaders about grieving a "U" in your file. He also opines about the contract in "What Lurks Beneath".

NYCEducator recounts a visit from a Unity member to inform his staff about the upcoming contract vote.

Suisan posts an incredibly candid piece about the trials and tribulations of a board member trying to do right by the students of their district and survive the crazies.

The "marxist social cancer" that are teacher's unions is explored in length by Kodera.

Ok, let's role-play. You're the Chapter Leader/ Building Rep in a large high school. How do you roll with this?

Ms. C basks in the new found glory of being recognized by the LA Times blog. After a few short moments, she realizes she's out of the dark, pulls her trenchcoat collar up and steps back into the inky void of the alley shadows. (It is, after all, an anonymous blog).

The "Stormin' Mormon" presents his take on why schools aren't so good. I tried to read it, but I'm one of those dimmer undergraduate bulbs he mentions.

Prairie Central Teacher's Union in Illinois has filed an intent to strike.

430 Detroit teachers received layoff notices in October. The reason? Enrollment is down further than the district anticipated. DPS filed a contempt of court charge against the union on November 10th for refusing to return from their non-strike strike (remember, Detroit teachers can't strike) after a court order was filed in September. The contempt of court charge identified DFT on all levels, including officers, executive board and rank and file members as non-compliant with the court order. The district was seeking monetary damages due to their refusal to return to work. As the result of a "long standing arrangement" DPS had been deducting the union's dues from member paychecks and then transferring the funds to the union. Unfortunatley the District hadn't transferred a single dollar to the union since the end of the strike.

The very next day, DFT President Janna Garrison went to the District's Fisher building to find out some answers. She was unsuccessful in actually talking to anyone and refused to leave, necessitating her removal by the police. Detroit Federation of Teachers did have their contempt of court case thrown out by the courts, as the district filed the charges after the union refused to go back to work after a court order in September of this year.

The Detroit News opines upon the earth-shatering implications of the fact the teachers went on strike, improved their working conditions and didn't get punished...but should have been. A somewhat common man responds to the Detroit News Editorial, and (gasp) supports the teacher's union.

Thanks for noticing those of us in the opposition. I don't know what else to say because I don't think anyone has done so before.

No problem. It's always good to have an opposition.

Since I love Antonucci's work, I doubt we'd agree on too much.