As The Snow Falls: The Anchorage Saga 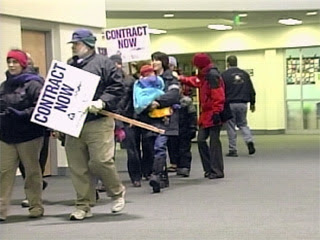 The arbitrator's report (PDF) came back earlier this week for the ongoing neogtiations impasse between the Anchorage Education Association and the Anchorage School District. In the beginning, both claimed that it backed up their side. It supported the administration's contention that there was not more money in the district finances to give the union the raises they wanted. It did show that the district was at the bottom of the pay scale in the region. The local NBC affiliate ran a story on it here and here. The arbitrator did say that teachers deserved more money, there is just none to be had. Here's another local affiliate's report.

The online poll was blocked by the district, after people notified administrators that teachers were using school computers to vote.
Recently, this Opinion piece popped up about what should be done.

In a completely unrelated matters, (well, sort of) you've got to read this great post by Ms. Cornelius over at A Shrewdness of Apes.
Posted by Dr. Homeslice at 9:55 AM