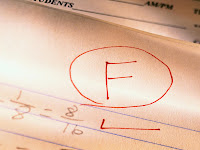 In California where this occured, state law says teachers determine final grades, but they can be changed "in cases of fraud, bad faith, incompetence or a clerical mistake". During the time the student was in Julie Abate's class, the union was involved in some heavy level negotiations with the school district. It got so bad that the teacher's union began to work to the rule.

For the unitiated, working to the rule is a job action, similar (but less severe than) a strike. It involves teachers doing the bare minium that the contract requires and nothing more. Typically, teachers walk in when their contract says walk in, and leave the building when their contract says leave. Extra curriculars are cancelled that aren't part of the contract (through chaperoning duties or extra pay) and typically the school becomes a ghost town as soon as the bell rings.

The board is saying that teacher Abate's grade was changed for student X due to the fact that she didn't grade a test in a timely fashion during work to the rule. The lawyer for the board has called it bad judgement, which somehow falls under the clerical mistake piece of things in the state law where a school board can change a student's grade. I would disagree with the lawyer's stance on this one, I think she's scrounging for an argument.

Some of you may be wondering why the union is spending dues money to defend a student's failing grade. It's quite simply, really-- the teacher did nothing wrong. If you're going to truly follow "work to the rule" you can't grade papers at home, and you have to find a few moments during your contract day to grade 'em, which is really, really hard. The teacher was excercising their right to participate in a collective bargaining action, and this needs to be supported.

Make no mistake about it, the case is not about whether a student passed or failed; it is about the rights of the Tracy Education Association to engage in a collective bargaining action and not face any retribution as a result. Clearly the school board seems to think that by participating in such an action, a teacher loses professional credibility and efficiency. As those of you know who have participated in job actions before, this is not the case. Shame on you, Tracy School Board. I hope the TEA win this case and the school board pays their legal bills.

On a side note, Marlborough Educator's Asssociation in Marlborough, Massachusetts have been working to the rule. Give 'em some support.
Posted by Dr. Homeslice at 11:39 PM

49066. (a) When grades are given for any course of instruction taught in a school district, the grade given to each pupil shall be the grade determined by the teacher of the course and the determination of the pupil's grade by the teacher, in the absence of clerical or mechanical mistake, fraud, bad faith, or incompetency, shall be final.

Hey doc. Just wanted to let ya know I've posted on a teacher strike you haven't gotten to yet.

In Iran, of all places.