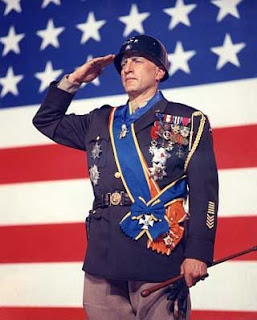 Hang on, hang on there.

Don't get all upset on me now, I'm not talking about what you think I'm talking about. Shame on you.
Actually, I'm talking about transparency and accountability; they seem to be the new buzzwords in this recession-filled time of awe and economic wonder. In education, too-- and what should be transparent and accountable? Data!
I had some free time lately, and I picked up a copy of "A Byte in/at/of The Apple", the new Fordham Foundation's ode to data. You might be wondering "Why, Doc? Why would you do such a thing?"
I direct you to a classic American movie, 1970's Patton. In it, when General George S. Patton is routing Rommel in the deserts of Africa he yells at the top of his lungs "Rommel, you magnificent bastard, I read your book!" This underscores the fact that Rommel, brilliant tactician that he is, wrote a book about his tactics, which aforementioned American general read and adapted his tactics to, thereby routing the "Desert Fox". Whether or not Patton actually said something like that, I don't know, but it is a memorable quote.
So I figured I'd do the same thing, make like Patton and read Fordham's book. It's uh, a data-filled book.
You spend a lot of time looking at that word, data; it appears there 2,375 times through the 154 page book, an average of slightly more than 23 times per page. By contrast, the word union appears just 17 times, and only 16 of those refer to the teacher's organized labor movement. Accountability shows up 78 times, transparency 17. Teacher shows up 436 times, administrator 43 times, management 184, and principal shows up 57 times. No, I didn't count 'em, Adobe has a nifty search function.
The best and most intriguing part of this book? The student data backpack. Summarized quickly, whoever wrote the essay (they're piecemeal parts combined into one book) about it, suggested that school districts (in essence) should create virtual student data backpacks; every bit of data on a student that educational folks have does in there: grades, attendance, standardized test scores, aggregate data about strength and weaknesses across state and perhaps national (gasp) academic standards.
This data backpack would be kind of tied in to a social-networking, web 2.0 type of "thing". It's interactive, so parents can find opportunities for their students (extended learning opportunities, other education settings, etc) and interact with other parents and educators and such.
I have to say that I like the idea...to an extent. I think that records and important individual student datasets need to be accessible to teachers. Whether it's district assessments, state achievement tests or other testing data, that's a good thing. I remember back in the day when I started, when you wanted to find something out about a kid, you had to catch a secretary when they weren't busy to pull something up on their DOS based system that was slower than molasses on a winter day or thumb through stacks of yellowing manilla envelopes in the stuffy, moldy school records room until you forgot what (or who) you were looking for and just gave up.
They're also right that there are few opportunities to catch appropriate data for mobile kids and families in an urban setting; I can't tell you how many times I get a bad phone number when I go by an office printout.
This piece doesn't take into account several things, the first being the digital divide, especially in my school system, an urban one. More and more of my students' families have computers with internet access each year (perhaps 40% or so now) but generally the kids are much more savvy with it than the parents are.
The thing I don't like about this essay is the postulation that parents in the future could "send" their records to a school and that would be the official act of enrolling a student (aside from answering a few other questions when you enroll). I think, in the educational landscape of things, that you need to "kick the tires" before you buy. Just clicking a button to change you student's education placement strikes me as convenient and easy, but not necessarily the best idea.
Also, there are just 17 mentions of the word security throughout the WHOLE BOOK. Who is to safeguard this information? Local districts? The state? The federal government? What happens if someone hacks into a database? Can you buy new SAT scores online, like you can buy someone's credit card numbers? I don't know. Interesting stuff, but still science fiction....
"Checker you magificent bastard, I read your book!"
Posted by Dr. Homeslice at 9:16 AM