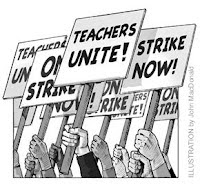 This is an update from the past week regarding negotiations all over the nation. My district's not negotiating this year, but all of this job action type stuff makes me want to join a march or something.
For the latest on teacher union strikes or negotiations, click here.

California
In at CSU (California State University) Monterey Bay, profs shouldered their pickets and marched the quad this past Wednesday. Union Librarian has more here.

San Mateo Teacher's Association picketed their schools and district office after they reached an impasse in negotiations. The district also tried to increase teachers' medical costs prior to the official reach of impasse. The union filed an unfair labor practice and won and PERB declared in favor of the teacher's union. More on the ULP/ PERB ruling here.

Indiana
West Lafayette teachers didn't think their negotiations were going well, so they put an ad out in their local paper.

Massachusetts
In Watertown, Massachusetts the teacher's union marched on their town hall. In true New England fashion, they didn't start chanting slogans or shoulder their pickets until they could see the whites of their opponents' eyes. (Sorry, couldn't resist.)

Michigan
In Lansing, Michigan the teachers are out in full force. They're picketing the administration building after voting down a contract proposal last week.

Pennsylvania
Negotiations are certainly going on Pennsylvania right now. There are 2 on strikewatch as we speak. This one seems to be going a bit better.

(2/4) Rochester Area School district teachers, cafeteria workers and the like will be going on strike on Monday at 12:01 AM. Read about it here. Change in plan, read more about it here.

What is up with Pennsylvania? It seems as if every district and their mother is in negotiations right now. Perhaps it's regulated by state law. Anyhow, this union in this district wants negotiations open to the public, while the school board says "No, we don't negotiate in public."


Wisconsin
Orfordville's Parkview Schools Education Association is currently working to the rule due to the fact that negotiations have failed and they have been without a contract for three years.