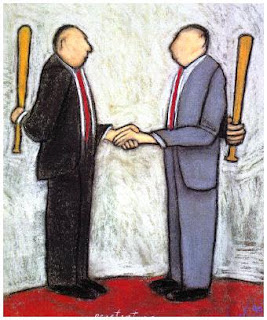 Whew....I'm glad I don't have to deal with the frustration King City Joint Union HSD is causing their teachers' association.

First, if you go to their website it looks like one school district, but is actually two: one for the high school and one for the elementary.


The teachers of KCJUHSD (man, what an acronym) should be getting their retroactive money in about two months or so, but are you ready for the kicker?

All this is only good through the end of the 2007-2008 school year. Then they have to start negotiations all over again.

(Words by Dr. Homeslice, Artwork above "Negotiation" by David Ross.)

For the latest on teacher union strikes or negotiations, click here.